Occasionally – perhaps once in 150 reviews – a reader expresses doubt that a woman PI like Maggie Sullivan could have existed in the late 1930s or 40s. Admittedly they were a rare breed, but women private detectives and policewomen were around in that era and well before.

The best known among them is without doubt Kate Warne. She is widely listed as the first woman private eye, having been hired by the famous Pinkerton agency in 1856. Described in their records as slender and of medium height, she presented herself as a widow, age 23, when she applied to work there. She went on to become one of Pinkerton’s most valued agents. Among her accomplishments was helping to foil an assassination attempt on the newly elected president, Abraham Lincoln, in 1861.

Read more about Kate Warne on the Library of Congress blog.

Cora M. Strayer operated her own private detective agency on the South Side of Chicago in the early 20th century. She first ran an ad for her services in 1902 and used her four-room apartment over a tavern as her office. (The tavern downstairs was home to illegal gambling and bookmaking operations.) In 1905 she ran an ad for her agency in Chicago’s city directory. It included her photo – and what a nice Victorian lady she appears. With some ups and downs and colorful detours, she continued to advertise her services as a private detective until 1930.

See what Cora looked like, as well as her ads, in a rollicking 2012 blog post by Paul Reda. 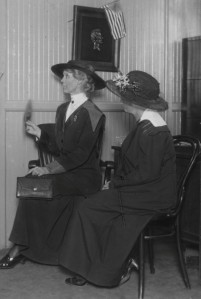 Policewomen in Dayton, OH, circa 1918. Lulu Sollers is on the left.

Dayton, Ohio, where my Maggie Sullivan series is set, established its “women’s police force,” in 1914. Officially titled the Bureau of Policewomen, it reported directly to the Director of Public Safety. Previously the city had employed jail matrons to interact with female prisoners. When policewomen came on the scene, they were another breed entirely. They handled probation cases, conducted some forms of surveillance and gave talks to community organizations. With time their duties expanded to checking dance halls, investigating juvenile crime and more. They wore badges like their male counterparts, except that the women’s badges were two-thirds the size.

In 1914 Annie R. McCully, who already was working as a matron, became Dayton’s first full-fledged policewoman. She was put in charge of organizing the new Bureau. That same year, Lulu Sollers pinned on her badge as well. Four years later she became supervisor of the Policewomen’s Bureau, a position she held until 1944. In 1929 the city hired its first African American policewoman, Dora Burton Rice. 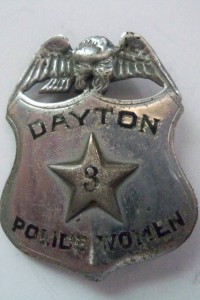 Policewoman’s badge, also known as a ‘shield’, from Dayton, OH.

Photos are courtesy of the Dayton Police History Foundation.

Down the road in Vinton County, Ohio, voters in 1926 elected the state’s first female sheriff. Her name was Maude Collins, and she was elected “in a landslide”. She filled the vacancy left when her husband, Sheriff Fletcher Collins, was shot and killed at close range. A mother of five, she carried a gun and had impressive detective skills. Her solving of a double homicide got her a write-up in the national Master Detective magazine.

See a photo of this attractive young sheriff and read a fuller account of her accomplishments at the Vinton County Convention &Visitors’ Bureau website.

Good historical fiction often is inspired by real-life women such as these, women who though few in number actually existed. One thoroughly fun example is the new Laurel Private Eye series just launched by Shannon D. Wells about a woman Pinkerton detective in Texas in the 1930s. It came into being because a several-generations-removed relative of the author was — you guessed it — a woman Pinkerton in Texas in the 1930s.

Now through Dec. 6 A Touch of Magic is discounted to 99c on Amazon, B&N, iTunes and Kobo.  It’s not a Maggie Sullivan mystery, but it’s a fast-paced thriller of romantic-suspense originally published by Dell.

A dazzling sleight-of-hand artist is recruited by the State Department to pit her skills – and wits – against a master terrorist.

Women are often overlooked in the history books. I read a book just over a year ago that was about the nurses that served in WWII entitled, “And If I Perish: Frontline U.S. Army Nurses in WWII.” Besides laughing and then crying, it was amazing to learn the U.S. Military didn’t keep track of them or give them their military benefits until the 1980s! I love history and I think it’s very important to show that women were and are doing important things.